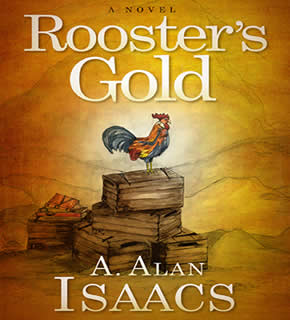 Alan Isaacs is a grateful man. Born in Tennessee and raised by a multitude of story tellers, Alan developed a lifelong appreciation for creative and positive media.  He hopes this pioneering form of entertainment, which celebrates and encourages orphans and their forever families, blesses the reader.  Alan lived in Philadelphia for 12 years and worked in Manhattan for two before returning to Tennessee. He and his wife live just south of Nashville in Franklin, Tennessee with children living in Madrid, Atlanta, and Knoxville.

In an innovative work of interactive historical fiction, use a cell phone to snap pictures of TrueBlue IM™ QR codes embedded throughout the novel to effortlessly connect the written word to an internet-based resource and learn the truth about several of history’s heroes and Xander Hawkins, an extremely wealthy man from Tennessee who engages a New York lawyer to create a Trust Fund to extend his life’s calling—the encouragement, education and care of Orphans.

Re-experience historical fact as it is woven into the fictional fabric of the Hawkins family by sitting in Xander’s study alongside the lawyer as he listens to stories about how the Hawkins family discovered a love for orphans and an unimaginable treasure! Over several days, the lawyer learns how more than 200 years of ‘Journaling’ from Xander’s ancestors continues to influence his approach to life.

CHAPTER ONE: Return to Xander

The King of the Wild Frontier!

The Indian Removal Act of 1830

'There's gold in them thar hills'!

Preparing to fight at the Alamo

Mexican forces at the Alamo

Defenders of the Alamo

Xipe, the Aztec god of goldsmiths

The History of the Alamo

Cold night at the Alamo

Battle Tactics at the Alamo

Not willing to work, no eating

He won't Leave us as Orphans

Roosevelt: Assistant Secretary of the Navy

CHAPTER TWO: Back to San Antonio

The First US Volunteer Cavalry Regiment

The Train to Tampa

An Army Travels on its Stomach

Fear is an Adversary

Bad Meat in a Can

Fighting in the Cuban jungle

CHAPTER NINE: The Next Chapter

CHAPTER FOUR: It's a New Day

CHAPTER FIVE: Two are Better than One

CHAPTER SEVEN: A Time to Bond

CHAPTER NINE: What a Difference a Day Makes!

CHAPTER ONE: The Crash

CHAPTER TWO: All is not Lost

God Looks Upon Me with Favor

How God Sees Me

How I Choose to See Others

CHAPTER FIVE: What in the World?

The Devine Power of Love can Redeem

No Income Tax in Tennessee!

Davy Crockett at the Alamo